The River has always been of vital importance providing transportation, communication and fishing for the residents of Mortlake and East Sheen. It was on the River in 1348 that the first church, Saint Mary the Virgin, was built. Re-sited in 1543 its tower is the oldest building in the Parish.
It was also on the River that the famous Mortlake Tapestry, the area’s most illustrious industry was located in 1619. It was established under the patronage of James I and continued in existence producing exquisite tapestries and other fine goods until it finally closed in 1703. From the seventeenth-century onwards the produce of many market gardens was transported by barge down-river to London . 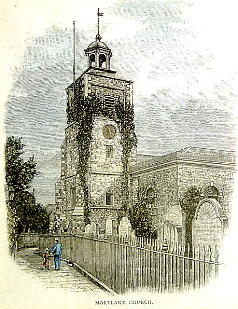 John Dee was buried in the original Chancel of St Mary the Virgin Church, Mortlake. Unfortunately there is no register of burials for the years 1603 - 1613. Sixty years later John Aubrey visited Mortlake, and interviewed Old Goodwife Faldo, who knew Dee. She told him:

“He is buried in the middest of the Chancel, a little towards the south side. He is buried between Mr Holt and Mr Miles, both servants to Queen Elizabeth. On him was a stone without any inscription and two or three brass pins".

The following is from Charlotte Fell Smith, John Dee (1913), Chapter 3, MORTLAKE: Before 1570, John Dee took up his abode with his mother, in a house belonging to her at Mortlake on the River Thames.

It was a rambling place standing west of the church between it and the river. Dee added to it by degrees, purchasing small tenements adjoining so that at length it comprised laboratories for his experiments, libraries and rooms for a busy hive of workers and servants. Mrs. Dee occupied a set of rooms of her own.

None of the old premises now remains unless it be an ancient gateway leading from the garden towards the river. [This no longer exists. Ed. The only remaing part of Dee's house is probably a short length of garden wall allong the western edge of the churchyard facing the church tower]

After Dee's death the house passes through an interesting phase of existence, being adapted by Sir Francis Crane for the Royal Tapestry Works. At the end of the 18th century a large panelled room with red and white roses carved and coloured was still in existence.

Early in the 19th century the house was used for a girl's school.

The Lost Library of John Dee 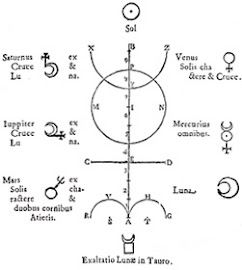